Think Like a Champion: The Best Mental Approach to Golf 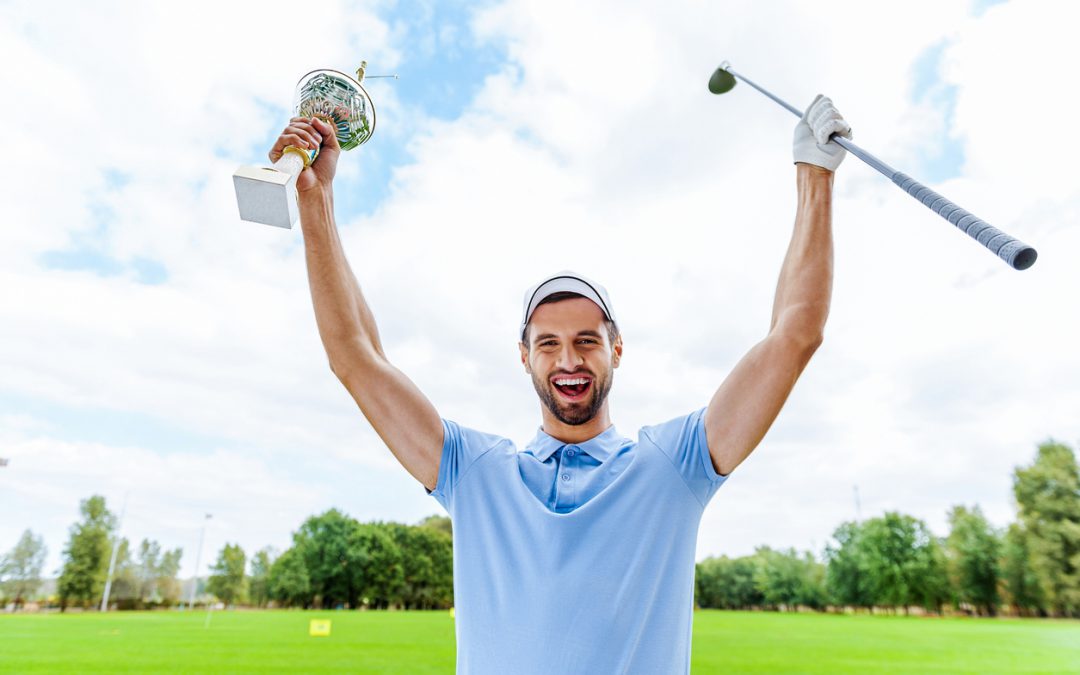 Many years of providing sport psychology to players of all levels on the PGA, SR. PGA, NIKE, and LPGA TOURS has given me considerable insight into how these players think, both on and off the course. You probably will not be surprised to hear that patterns of thought and attitude emerge and remain consistent with the various levels of play.

Champions definitely think differently than the rest of the field most of the time. This is at least one reason why Harvey Penick suggests to his students that if they want to be a good putters, they should hang around good putters.

If you want to know how champion golfers think, try talking to them. Much can be learned by assessing how they see themselves and where they place their priorities. Catch them at the right time and you will often find them more than willing to share insights. If you cannot talk to them, read their printed comments before, during, and after one of their successful rounds or events. Better yet, observe them. Watch their mannerisms: how they handle adversity, how they react to bad shots or putts, how they carry themselves, how they treat their caddies, and what they do between shots.

Gaining and retaining these thoughts and beliefs is not always easy—if it were, we would all think like champions. While it is easier for some personalities to think like champions because of positive backgrounds, genetics, past experiences, and physical skills, we can all do more to accept our current strengths and put more effort into maximizing and improving what we currently have. Here are a few suggestions.

Develop a Personal Mission Statement as a basis for Overall Goals.

Champions generally have a passionate belief in a personal philosophy that establishes their basis for setting their goals. If you ask the champion his purpose in life, seldom do you just hear “to be a great golfer”. This is generally accompanied with desires toward being the best he can be in numerous areas such as being a devoted spouse, good parent, loyal friend, and perhaps even a crafty fisherman, serious movie buff, an avid basketball fan, or someone who handles adversity well and learns from his mistakes.

The personal mission of a champion golfer is seldom centered solely on golf. Jack Nicklaus credits his successful longevity in golf to the fact that he also prioritized his wife, his family, tennis, and other business interests. This multi-centered approach provides a sense of balance for the champion golfer by reducing conflict in these areas and providing him a healthy support system. It also minimizes risk of burnout and helps the champion retain confidence and patience during slumps, minimizing their duration.

The personal mission of a champion golfer keeps him closely connected with his original reasons for playing professional golf. These are generally related to his love for the game, the competition, the challenge, being his own boss, being outdoors, meeting interesting people, travel, etc.

Golfers almost always struggle when they play golf primarily for the money, recognition, self-esteem, parents, teachers, club members; as an escape from problems; because they don’t know what else they can do; or for any reason where they feel they “have” to play. It is important that the golfer feel he is in control of his game, not that the game is in control of him.

If you have not already done so, take some time to begin developing your own personal mission statement. Keep in mind that your mission is unique to your interests, values, and philosophies and sometimes takes weeks to fully develop. To get started, try the following. With pencil and paper, set aside at least one half hour of uninterrupted time.

If you have trouble identifying purpose and/or goals, consider reading more on the subject. Many players have found Stephen Covey’s book, “Seven Habits of Highly Effective People” a good resource for learning to define their personal mission.

If your purpose is not consistent with your goals, consider talking with a qualified sport psychotherapist to help you clarify you mission and supportive goals. If your overall mission is clear and balanced, and your current priorities, attitudes, and goals support your mission, you are well on your way to thinking like a champion.

Learn to Thrive with Adversity!

Attitudes like Stockton’s are common to champions during competition. They seldom let themselves give in to what some players call “the luxury” of being negative, down or miserable about their current challenges.

Here are some examples of ways champions attempt to thrive with adversity. In each case recognize you have a choice in how you choose to view the situation.

Average player: Sees himself as a victim who can’t get a break. Feels he is being robbed, punished and at times even cursed with bad luck. Without realizing it, his attitude and expectations can exaggerate and perpetuate his problems.

He anticipates these bad results, fearfully. This raises his emotions even before anything has happened. This makes the bad luck a self-fulfilling prophecy. He is looking for the spike mark or the out-of-bounds left.

Champion: Accepts that every golfer will have a percentage of “bad luck” and that his current mishaps are part of that percentage. When he is “on a roll” with bad luck, he reminds himself that in the long run he will see his luck change and average out with the good, particularly if he remains patient and optimistic. He checks to see if his attitude could be contributing to the bad luck. He then attempts to look at the situation as his challenge to maintain composure and focus rather than a problem that sabotages him.

Average Player: Fears a slump and has a sense of panic at it’s onset. He does not recognize that slumps are a natural part of his game and are common to all golfers. He feels something is terribly wrong with him or his game to cause the slump. He tries to force himself back on track by over-practicing, over-exercising, over-playing, or over-worrying. In doing this he often creates more anxiety, pressure, and tension for himself, thereby intensifying the slump making it deeper and longer.

Champion: Accepts that slumps are a natural part of golf and relaxes into trying to understand them rather than fearing and fighting them. If necessary he is willing to talk to a qualified sport psychotherapist to identify any possible psychological causes for the slump, such as unknowingly slipping into playing for the wrong reasons; becoming much too “left-brained” in his play due to major swing changes; playing with many unresolved personal issues; experiencing fatigue, burn-out, and lack of purpose; or focusing too much on outcome instead of process.

Average Player: Before, during and after the round he can be heard complaining about heat, cold, rain, wind, bad greens, poor course designs, burnt-out fairways or whatever else can be considered an obstacle to his play. He unknowingly is allowing himself the “luxury” of feeling negative or miserable about something he cannot control. Almost instantly, his attitude can change the poor playing conditions from simple physical obstacles to complex mental obstacles as well.

Champion: Acknowledges the poor conditions and catches himself as he begins to take a negative view of them. He knows his attitude will either magnify or diminish their impact on his play. He chooses to take an attitude that will be the least distracting mentally.

Instead of seeing the spike marks between his ball and the hole, he will be intent on seeing his line from the ball to the hole and roll the ball as best he can.

Rather than complain about the conditions of the course acknowledge that it poses the same challenge for everyone, and its an advantage for him if it affects the attitude of other players and not his.

Average Player: He associates playing poorly with being worthless and responds in a traumatic way. Sometimes he is bothered by a bad round for hours or even days. He tends to think if he works hard enough on his physical game that he can avoid failure, not recognizing that failure is a very natural part of golf for everyone who plays it. Because he is more prone to try to correct physical mistakes than to understand what mental mistakes might have contributed to failure, he is very likely to repeat mistakes.

Champion: Understands that bad rounds are an inevitable part of competitive golf. After a bad round, he uses his mental energies constructively by assessing what he can do better rather than ruminate about what he did poorly. He recognizes that his bad rounds can teach him much more than his good rounds, if he is open to learning from his mistakes. By staying observant of his mental tendencies in specific situations (such as playing in contention, playing on a “home course”, playing in wind, playing with slow players, etc.) he can then set mental goals to counter his tendencies when he next faces the situation.

You will likely find that playing in the moment and detaching from your round are two of the most important and most difficult thoughts to emulate for competition.

Play in the Moment

Be willing to give up old habits of looking ahead and behind in your rounds. Truly feel that every single shot and putt deserves 100% of your effort and focus. Trust yourself to play by athletic “feel” as opposed to by manufactured “mechanics and techniques”.

Detach from Your Results

Strive to become less emotionally involved with results of your play.

Make process (hitting a solid shot or rolling a putt well) much more important than outcome (concern about where the ball may or may not go).

Strive to make enjoying your round more important than what you shoot.

Remain committed, while playing, to goals you can control (attitude, mental routine, negative thoughts and tension) rather than goals you cannot control (where the ball lands, what you shoot, cuts, wins).

By playing in the moment and detaching from your results, you will find competitive golf easier and much more fun. Best of all, good results will soon follow!

The Best Mental Approach to Golf: A Champion’s Mindset

If you need help gaining your champion golf mindset, GolfPsych offers instruction and tools to help you strengthen your mental game.

Start with the Personality assessment to see how your golf mindset and mental game aligns with the Tour champions. The assessment will also include personalized recommendations to improve your game. You can also contact us any time to learn more.