There are 8 Champion Personality Traits for Golf! 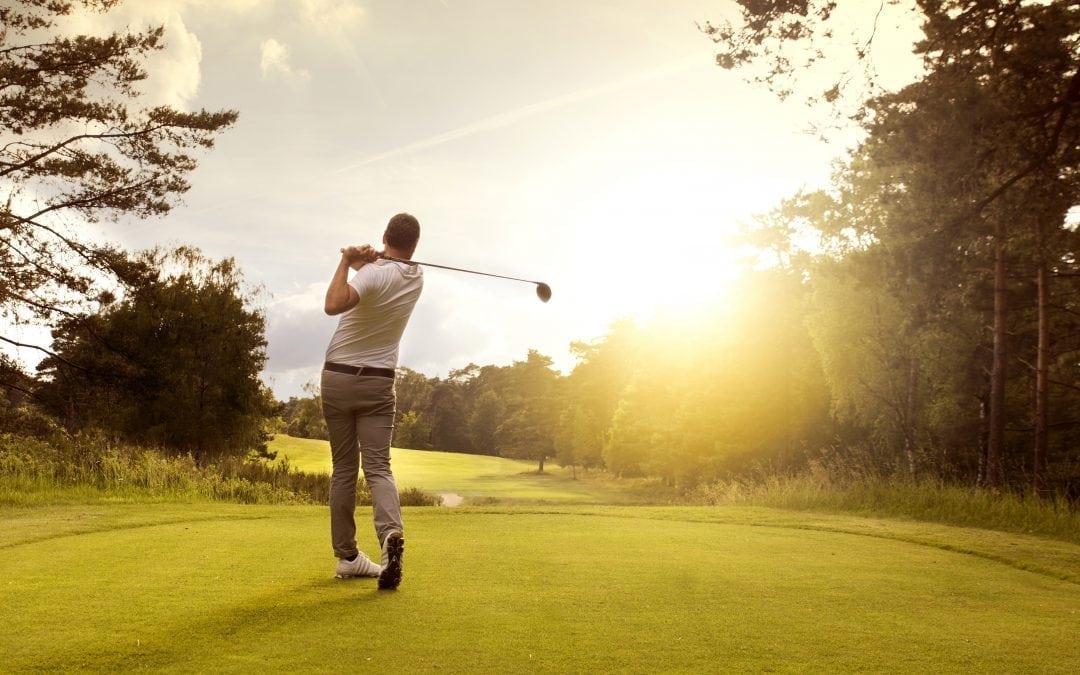 The Golf Personality Traits You Don’t Have Could Be Wrecking Your Game!

Learning the 8 key Mental Skills for golf can be very difficult if you do not naturally have the eight Champion Personality Traits to support them.  Knowing which of your golf personality traits is weakest, and then learning how to manage it, will be like finding the missing piece of the puzzle that will allow ALL your skills to come together for some great golf.

It’s like having a finely tuned engine with a missing or dirty spark plug.  Your car will run, but not at its best.  You can put in new belts, replace the oil, fill it with premium gas, and polish it nicely, and the car will look great but it still will not run at its best when it’s actually on the road.

So now compare that to your golf.  You can get lessons from a great pro, work out with a trainer, be fitted for the best clubs, practice hard, even learn great mental skills, like a great mental routine.  But if your personality is low on confidence, or emotional stability, or decisiveness— any one of the 8 champion personality traits—you will not be able to play your best golf! Your golf may look great in some respects, but you won’t perform at your best when you’re actually on the course.

How to know if you have a personality weakness for golf

First of all, the answer is almost certainly “you do!”  The question should really be “which one(s) are they?”

How do we know that everyone has a personality weakness? We’ve worked with thousands of players, including almost 400 Tour pros, many of whom have been in the top 30 in the world. Of all these players that have been tested by GolfPsych, no one has tested perfectly for all 8 of the champion traits.

Every player comes to golf with some personality trait that can be better tuned or better managed for better play. At one point in time, some people believed that the best pros like Tiger Woods were an exception, but he has shown to have his weaknesses as well.

Knowing you have a weakness is important, but you can’t improve it until you know exactly which trait is the weakness. Ready to see if you can find yours?  Take a quick look at this 8 Traits Personality Assessment and Report that GolfPsych created for one of these prominent Tour Pros.

While reviewing it, think about these three things: 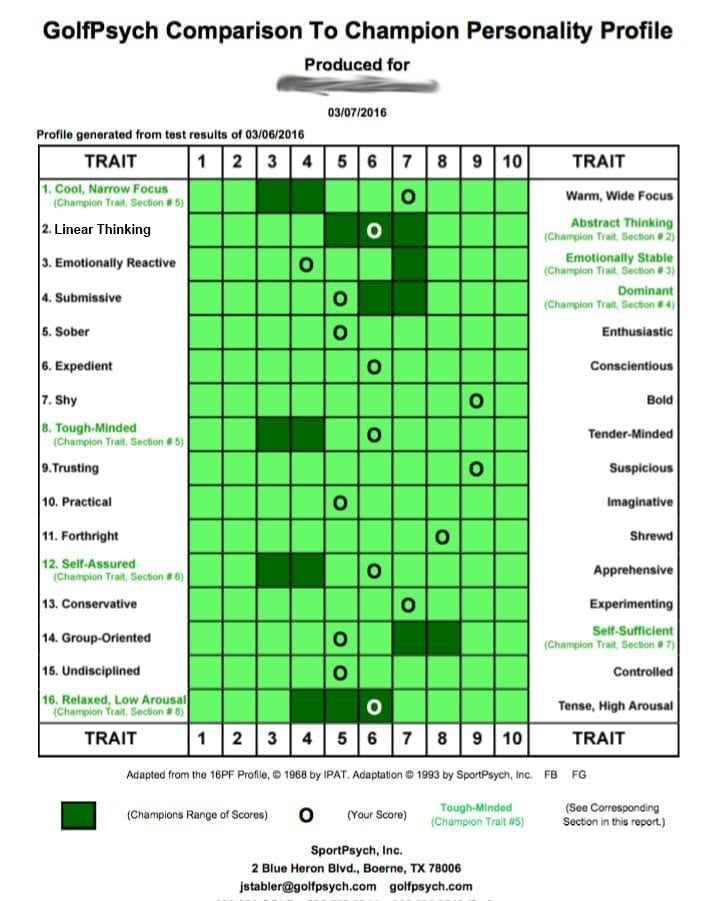 If you guessed “Focus” for Tiger’s tremendous strength and “Emotional Stability” for his challenge, you would be “batting 1,000”.

If you said this Tour pro has had to work most on Focus, Emotional Stability, and Self-Assurance you would be right on the mark.

This player did everything possible to keep from having to go back to school after 3 consecutive years of losing his card.  He changed clubs, changed teachers, hired a trainer, and even changed his diet.  His play got worse and he began a streak of missing cuts.

After being pushed by his brother for two months, as a last resort, he finally took the 45 minute on-line personality questionnaire to get his 8 Traits Personality Assessment and Report.

On first reviewing his profile he was shocked to see that he had a “perfect score” on only one of the eight champion traits and was “really close” on only a “couple”.

And finally, he learned that he was much more apprehensive than the statistical champion and needed to learn ways to strengthen both his personal and performance confidence, to play his best. He took some comfort in learning that if he worked on self-confidence (self-assured on the profile) alone to start, it would have a positive influence on all of the other champion personality traits. So he started with self-confidence, which his report divided into two important areas:

Here is a summary of the steps he learned and used to strengthen each.  See if your own self-confidence could use a boost with some of these steps!

Make a list of affirmations—things that make you a special person, like being honest, hard working, loyal, good friend, etc.  Carry your list with you and look at it often, especially after poor play.

Look forward to any compliment you get as an opportunity to practice accepting them graciously rather than deflecting it with an idle response. For example, if someone says, “you look great today”.  Instead of replying, “you must need glasses”, say “thank you, I feel great!”

1.  Always look for the positive, then use the negative as a goal, not as a criticism!

2.  Walk and talk with confidence!

Fake it until you make it!  No matter what the result, give yourself no more than two seconds to react then:

3.  Find something positive to say after every single shot or putt!

After any shot or putt you do not like, first and foremost, find something positive to say.  For example, if you had the right club, but hit it off line, acknowledge the right club.  Challenge yourself to do this for the entire round

This player went on to work on his 8 Traits Personality Assessment and Report recommendations for managing emotions, and on re-testing found all of his scores had moved closer to the champion measures, with 4 being in perfect measure.

Even better, he not only avoided a trip back to Q school, He Won and he had the pleasure of being one of the FIRST TIME WINNERS to play well in the TOUR CHAMPIONSHIP at the end of the year!

Now how about you?

Where do you think you would score on each of the 8 Champion Personality traits? Get your own 8 Traits Personality Assessment and Report today and find out exactly what is keeping you from playing your best golf. You’re also welcome to check out our book on the best champion golf personality traits.