“A positive mental attitude is a key ingredient to a balanced, long, and happy life.”
from King of Clubs: Grow Rich in More Than Money by Robert H. Dedman

Thought patterns, such as optimism and pessimism, have long been grouped and studied by social scientists to determine how people with one particular pattern compare to people with a different pattern when placed in similar situations.

These thought patterns can dictate the way we see our reality, including how we perceive our abilities as a golfer. They underlie our motives and choices as well as influence the degree of confidence we carry with us as we strive to master the game of golf.

In this and subsequent newsletters, we would like you to take a closer look at how your beliefs and attitudes are helping or hurting your ability to play your best golf. Learn how to remain optimistic on the course by gaining a winning attitude.

Social and medical scientists who have studied the effects of optimism and pessimism have drawn some interesting conclusions. People who tend to be more negative are more likely to experience longer and more significant reactions to bad events of all types, such as poor performance, than do optimists. Pessimists are also more likely to have physical pain that can be caused by or magnified by their pessimism. It has also been observed that pessimists experience weakened hormonal and immune systems making them more susceptible to mood swings, fatigue, colds, the flu and diseases.

According to the author/therapist/researcher, Jon Kabat-Zinn, one study of professional baseball Hall-of-Fame members even showed that those who were pessimistic when young and healthy were more likely to die young than those who were more optimistic. As you can see, in addition to playing better golf, there are many other important benefits to being an optimist.

Golfers, like the general population, can be grouped into these two familiar categories based on their habits of thought. Optimists and pessimists often have very different ways of perceiving and of describing their good and bad play.

Though you experience both, your mental habits will tend toward one group or the other, especially when under pressure. The pessimists will look for negative outcomes and bad luck. The optimists will anticipate good outcomes and good luck. This will make it harder for the pessimist to succeed in playoffs and match play situations. They can succeed only when things go better than they expect.

Your tendency toward optimistic or pessimistic thinking will be a significant determinant of your overall success. While Kabat-Zinn found pessimistic Hall of Famers, their careers may have been that much better if they had adopted more optimistic attitudes. They would certainly have enjoyed their careers more and eventually lived longer.

We have found that optimism/pessimism is a major determinant of the severity and ability to overcome golfing slumps. The pessimists suffer more severe and longer slumps, thereby reducing their opportunities for success.

Review the following lists to help you estimate whether you are more optimistic or pessimistic in your views? As you read each one, place a check by the descriptions that best define you a MAJORITY of the time. 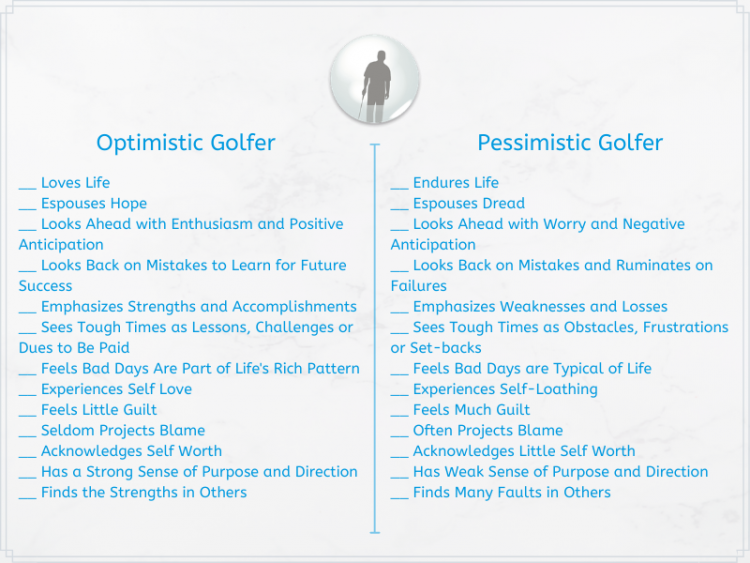 Following are examples of how your optimistic or pessimistic tendencies can influence your competitiveness in golf.

Optimists have an amazing ability to maintain an appreciation of the good in their lives as well as a special awareness of the opportunities that surround them.

Golf optimists seldom lose sight of the fact that being able to play competitive golf is a privilege and that each round brings with it some interesting personal test or challenge.

We know one veteran PGA Tour player who makes a point of reminding himself every single day how fortunate he is to play golf for a living and how many people would love to have his job, especially when he is tired, missing his family, or playing in difficult conditions.

Optimists tend not to blame themselves for the results of their actions, or if they do, they see it as momentary and something that they can solve.

Mistakes are lessons to golf optimists. There is always something to be learned from a bad shot, bad hole or bad round, something that can be used to improve future mental or physical performance. We always tell our clients they can learn more from a bad round than from a great round.

We know an LPGA player who optimistically looks for answers when she endures a problem in her game, such as missing all left-to-right putts for a sustained period of time. Refusing to succumb to the “why me’s” and wait for things to change, she proactively looks for and finds a solution, including mechanical changes and trusting her stroke, before negativity and frustration spill over into other parts of her game.

Optimists focus more on the specific consequences of what happened and do not make sweeping judgments that blow incidents out of proportion.

Golf Optimists see a bad first hole as just that, a bad first hole, attributable only to their specific actions. They don’t see it as an indication that the round or day will be bad.

The optimistic PGA Tour player that checks and recognizes his tempo was fast and his commitment was poor after missing his first tee shot to the left. Rather than conclude with disgust that he is doomed to a long day of frustrating play or that he cannot trust his driver, he commits to being more committed to his next shot and relaxed enough to swing with his normal tempo.

The pessimist has a habit of placing emphasis on the bad in his life. He is overly concerned with the obstacles and disadvantages that surround him, often seeing them as unusual or unfair.

Golf Pessimists tend to blame themselves for bad play or to project blame onto other people or things. When they do, they often see the problem as being bigger than it really is, and related to fateful sources that are very difficult or impossible to resolve.

Such as the Senior Tour player who feels his best efforts and abilities are almost completely negated by far more than his fair share of “bad luck” and “incompetent caddies”.

Pessimists tend to magnify and elaborate the consequences of what happened and make sweeping judgements that blow incidents out of proportion.

After the golf pessimist misses several short putts in crucial situations, he easily convinces himself that he is a bad putter then proceeds to embrace this perception and tells all who will listen that he “cannot make a putt”.

We know a Nike Tour player who, while in contention, had a round of poor putting and then proclaimed himself a lousy putter that cannot play the game. He instantly negated and forgot all the great putts he made to put himself on the tour and in contention numerous times during the same season.

It is interesting to note that many “pessimists” who have lost their Tour playing privileges, or who experienced serious injury or personal tragedy, have rebounded with a newfound optimism and appreciation for what they have and what they can do. Many times these experiences have been catalysts toward making them more optimistic, thereby enhancing their enjoyment of, and ability to play the game. You can do the same without the tragedy.

Challenge Yourself to Change

Start by challenging yourself with these two common sense, yet difficult tasks: 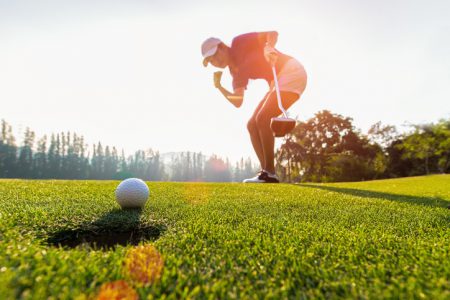 A talented LPGA player provides a good example of the effectiveness of this exercise. She called after the first round of a recent event feeling very distraught having shot 77, especially since she is a long hitter and was playing a short course. While talking it became evident she started the event with a very pessimistic view: critical of her game, hard on her caddie, berating the course, etc. She agreed to work on making the transition from being the pessimist to the optimist not only for herself but the wellbeing of her caddie, who by this time was beginning to feel emotionally battered. It became her goal to catch and replace the pessimistic thoughts with a more optimistic, but true statements prior to and during her next round. Following are examples…

Negative – “I do not like playing this ‘skanky’ golf course!”

After some thought, she replaced it with a genuinely positive statement,

Positive + “I like this course because I can reach all the par 5’s.”

Negative – “I hate playing here because of all the bugs.”

She reflected with a more positive view and observed,

Positive + “I like playing here because the people are so nice–one person just gave me some of the best homemade butterscotch cookies ever.”

Negative – “My caddie doesn’t listen to me.”

With some thought assessed that

Positive + “My caddie really does try hard. She probably does 9 of 10 things I ask her to do.”

In her second round she shot 66 and went on to finish in the top 25 in the tournament. Her efforts toward being optimistic played a large role in her ability to rebound, finish strongly and take home more satisfaction (and money!) and less frustration.

If you recognize yourself as being a pessimist, challenge yourself to change, starting with the simple steps described above.

If after considerable effort you find this challenge too difficult to master, see a qualified therapist to help you determine whether your pessimism is less a habit and more psychologically or physiologically based. Some pessimism, for example, could originate more from symptoms of serotonin deficiency, such as depression; or from chronic pain; or even from unresolved personal conflict. If so, good counseling and personal effort to change habits of thought can put you well on your way to becoming an optimist. The rewards are well worth it.

Remaining optimistic in golf is a key piece of your personality game, and is a mental golf skill that can be improved with practice. GolfPsych’s mental game coaching can help you become a golf optimist and start performing your best when it matters most. Contact us to get started.